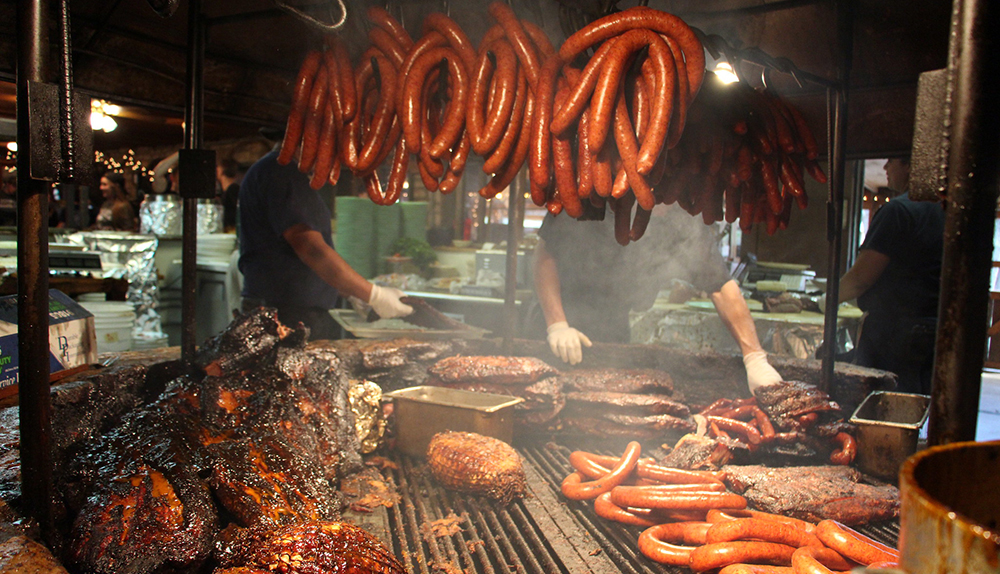 Of all the BBQ joints in Austin, which one is the best? Well that, my friend, is a fully loaded question. The answer may vary depending on which Austinite you ask, but we pulled together a list of some of our personal favorites.

If you haven’t indulged in any of the following BBQ spots, then we highly suggest you get your wet-naps ready and head out on an empty stomach.

Franklin’s recently grabbed the #7 slot on Business Insider’s America’s 25 best barbecue restaurants, ranked. With its tender brisket, fall-off-the-bone ribs, and smoky pulled pork, we’re surprised Franklins wasn’t name #1 in America (as it is in our hearts). The lines for this place are long (between 2-4 hours at times), but it’s well worth any wait.

This small little BBQ trailer serves up some great big eats. Open from 10:00 am until 6:00 pm, this is the perfect spot to grab some lunch or early dinner right off 6th street. You’ll want to order the cheesy squash (which is basically like eating mac and cheese but with squash instead of noodles) and Sriracha coleslaw for your sides. Then, go with brisket and homemade sausage. The sauce here is a peppery mixture of fat drippings and other spices and seasonings—get extra.

This is some of the best BBQ on wheels, which might be because the current food truck owner used to be the former pit master at Franklins. La Barbecue features delicious chopped brisket and smoked turkey that goes great with their sauces. The chipotle coleslaw is also a must-try. Oh, and did we mention they serve free beer?

Micklethwait’s is another BBQ trailer that serves up some incredible food. You can’t go wrong with any of the sides from the jalapeno cheese grits to the dill potato salad. The brisket Frito pie, with tender brisket, chili, cheddar, cilantro, escabeche, red onion and crema is absolutely delicious. And, try to get a whole buttermilk pie to go.

Pok-e-Jo’s BBQ chicken is some of the best in the area. In fact, all the meat options here are very tender—you can’t go wrong with any choice. Side-wise the mac and cheese and jalapeno cornbread casserole and green bean casserole are our favorites.

While gas station BBQ doesn’t seem like it would be the best option for excellent brisket, pulled pork, and breakfast tacos, the unique set up of Rudy’s makes it all possible. Newbies can get samples at the counter to help with their first-time ordering decision, but we recommend the baby back ribs, and brisket and jalapeno sausage. Don’t forget to order the banana pudding for desert.

Smoked beef brisket stew, jalapeno and cheddar sausage, smoked brisket meatloaf, chocolate Oreo banana pudding—are you getting hungry yet? Stiles Switch can help cure any BBQ craving. This place is moderately priced and not as jam-packed as some of the other Austin BBQ joints may be.

If you’re looking for good BBQ where there’s hardly a line, plenty of parking, and that’s centrally located, then Terry’s is the place to go. Pick two sides—the mac and cheese, and creamed corn can’t be beat—and two meats of your choice. Go for the brisket and beef ribs, and thank us later.

Once upon a time, Austinites would tell you that in order to get good BBQ you’d have to travel outside of town. One of those destinations was Lockhart, TX and one of the must-try restaurants was the “Original Black’s Barbecue,” which opened in 1932. Four generations later, Austenites can save the 30-mile trip and get some of Black’s infamous BBQ right here in town.

The Salt Licks is such a popular go-to Austin BBQ joint that the owners of the original had to expand into other locations (one in Round Rock and the other locations in the Austin, Dallas, and Oklahoma City airports). This place is known for its smoked meats (the ribs, brisket, and turkey are incredible), family-style servings, and casual atmosphere (it’s BYOB!). Just remember to bring cash.

If you’re looking to buy a home in Austin that’s BBQ-joint adjacent, drop us a line. You could find the perfect spot that’s within walking distance of some finger lickin’ good eats.